Green shoots is our monthly series highlighting alternative business models, and for this post we look at B4RN broadband.

Broadband internet has been in the news lately with the Labour party announcing that it would provide free internet access to everyone in the country. Set against this vision of state internet provision is the current system of contracts with private companies. There is also a third way, rarely discussed and only currently enjoyed by a handful of customers: community ownership.

B4RN stands for Broadband for the Rural North. It’s a social benefit company dedicated to bringing the internet to hard to reach households and communities in the North of England. These locations have so far been beyond the reach of the big internet companies, as running cables out to every last village and farm might not make economic sense for the number of customers it would reach. 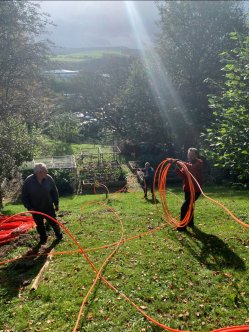 Instead, B4RN make it work by doing it themselves. Teams of volunteers dig the trenches and lay the cables. Farmers and landowners allow cables to be run under their land free of charge. Village halls get free internet access in return for hosting a network connection cabinet. And all of it is paid for with community share offers. The result is a high quality network that is owned by B4RN – and it offers some of the fastest broadband in the world at 1 gigabyte per second.

Since it is community owned and not-for-profit, B4RN is at liberty to serve the community. So schools get a high speed connection for £25 – far below the commercial rate for a much better service. Places of worship are offered a connection free of charge.

Because it doesn’t need to cream off a profit for shareholders, and it can leverage cheaper installation costs by using volunteers, B4RN has been able to offer a service that doesn’t make commercial sense to traditional businesses. It’s been able to create jobs in marginalised places, both in the business itself and in the new opportunities unlocked by internet access. It is helping to build the rural economy and reduce geographical inequalities.

Most importantly, it demonstrated the power of community enterprise. It is commonly assumed that infrastructure projects such as high speed broadband either need government funding or big capital. B4RN are proving that people power can be not just a third way, but a better way.