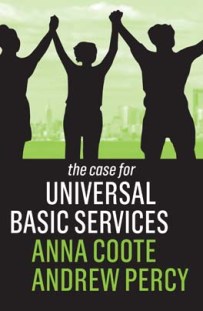 The idea of Universal Basic Services (UBS) was only coined in 2017, but has been taken up unusually quickly. It’s given a name to something people were already aspiring to. The Labour Party have taken it the furthest, adopting it as a pillar of their economic thinking at their conference this year. Though their recent manifesto didn’t use the term, it was there in the ideas of free bus travel for under 25s or universal free broadband access.

To explore more about the thinking behind UBS, this new book looks like a good place to start: Anna Coote and Andrew Percy’s The Case for Universal Basic Services.

It’s not a long book – 134 pages until you hit the notes. It explains basic services and why they are needed. Then it goes on to explain how it would work and how it could be rolled out. It’s written in plain English and it’s an easy read.

Basic government services already exist. Among other things, British citizens can expect education, healthcare, police and emergency services for free. But what else might apply? In the connected 21st century, is an internet connection basic? What about access to travel, or childcare? The UBS approach invites us to work out what we might consider “everyday essentials that everybody needs to live a decent life”, and then create policies that guarantee that they are “available and affordable for everyone.”

Affordability and accessibility are the main thing here: it doesn’t mean that everything should be free of charge. The book considers housing, and there’s no discussion of the government building free houses for everyone. But it shouldn’t be beyond us, in a wealthy nation, to make sure that everybody has an affordable and comfortable home. The same goes for childcare. A UBS approach would mean that anybody who wanted to work and needed childcare would be able to get it at a price that they could afford.

Neither does it need to be state provision. The book mentions things like housing co-ops, that we covered recently with the LILAC project. UBS would call on a wide ecosystem of community owned enterprises, charities, businesses, mutuals, etc to deliver its services.

As the book describes, organising things collectively lowers costs. People get more for their money if services are provided universally than if we all had to pay for everything individually. That makes UBS, in the authors estimation, better than a Universal Basic Income. It also addresses inequality better, since those on lower incomes would benefit more, whereas a basic income goes to everybody whether they need it or not.

While it might sound radical, one of the best things about UBS is that all the various bits of it are already done somewhere in the world. Lithuania has universal free broadband. Estonia has free bus transport. The Scandinavian countries prioritise childcare. In that sense UBS isn’t revolutionary. It’s a new articulation of how wealthy countries could make the best use of their wealth, and create inclusive economies that benefit everybody. Ensuring that the basics are available and affordable to anyone is a key element of the sustainable and fair society that we advocate at Joy in Enough.