Tony Emerson, Dulwich Hamlet FC fan, writes about how football can build community, pride and belonging in a fairer economy.

The economist Daniel Bromley, in his publication Possessive Individualism: a crisis of capitalism, says this:

“…Escape from the crisis (of the political economic system) requires that the isolated acquisitive individual rediscovers a sense of loyalty to others – as neighbours, as colleagues, and as participants in the shared social process of living.”

The Covid-19 pandemic really re-enforces this message. Shared living has been one of the most notable casualties of the pandemic.

In my retirement over the last eight years I’ve discovered what Daniel Bromley describes in very practical terms – in a rather surprising world. Dulwich Hamlet FC is our local semi-professional team in central south London. Twice in the last four years Dulwich won the national community club of the year awards. Our attendance averages some 2,500 spectators, more than the twice the average for their league (National South, level six in the football hierarchy). It’s a friendly and welcoming place – for away team supporters as well as our own.

In investigating its success, I interviewed Rob Hyndman, the club community organiser – who sadly had more time on his hands, as all football was off due to Covid-19. Rob sees a number of reasons for the success of the club, in social as well as in football terms: 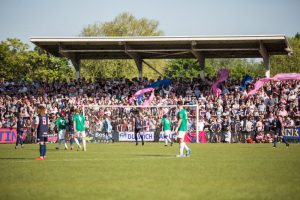 The community side of the club is run by volunteers, but the club is still a private company, owned by shareholders. Some clubs are actually owned by supporters or by their local communities, such as AFC Wimbledon, FC United of Manchester, Lewes FC, Exeter City, AFC Wrexham and Bath City – who came second to Dulwich in the community club award, as Rob proudly told me. But they always beat us on the pitch! No matter how community oriented we are, footballers are still competitive.

Another club strongly committed to ethical and environmental principles is Forest Green Rovers, based in Nailsworth near Stroud. They serve vegan food to players and spectators, have an organic pitch, solar panels and a biodiversity programme.  It is sponsored by Ecotricity, the green energy firm. (See ‘Football and the New Economy’, STIR magazine, Issue 27, 2019.)

I’ve also discovered the joys of walking football – playing it up to three times a week before personal injuries and then the lockdown got in the way. This is the game for those of us in our vintage years who want to revisit our childhood dreams. I’ve discovered two wonderful things as I developed football skill so late in life.

A football club can help engender a feeling of belonging, of pride in our community – as can rugby, cricket and other team sports, such as lacrosse in the Cheshire area. Coming originally from the west of Ireland I still have the maroon shirt of Galway United, which I can also wear on Galway county hurling and Gaelic football matchdays! I’ve got the green cap for watching Connacht, the provincial rugby team.

Ben Ryan of Theos reflects on local pride and its links to community cohesion and resilience : “Pride, instead of reflecting a town’s economic thriving, has become much more important as a resilience tool. It can be employed to defend a community from abject hopelessness in the face of an overwhelming list of economic and social challenges.”

I feel this sense of pride and belonging to a locality is weaker here in England. Most churches here try hard to foster it. Our second great commandment is to love our neighbours as our selves. We do so by coming together to worship and to look out for one another. So that we feel more connected to each other, pride in our local church and in our area.

Most community activities support this quest.  Football clubs can make a special contribution. We go the Champion Hill most weeks and shout ‘come on Dulwich’.  And, as you might have noticed, I say ‘we’ almost as much as ‘I’.