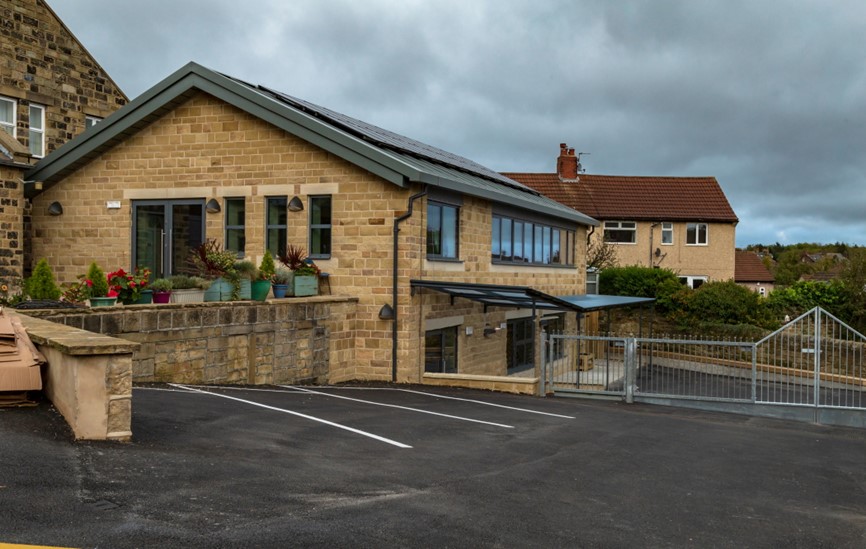 We recently featured an article on a Christian vision for sustainable housing. In this post, John Anderson talks about sustainable church buildings, and particularly what his own church has been able to achieve.

Many churches, sadly, are finding it difficult to model how buildings can be used within the ecological limits of the earth.  Baildon Methodist Church in Bradford, however, has been able to do so.

On the church site was a decrepit, thin-walled, asbestos-roofed building from the 1950s which housed many activities, including a flourishing decades-old preschool.  It was consuming half the electricity used on the whole extensive site of the church. The decision was taken to replace it with a two storey building built to Passivhaus standard, emitting no carbon dioxide and using very little electricity – the first building of its kind built for a church. It was given the evocative name of ‘The Fold’:  it enFolds the church and community, and it is situated in Binswell Fold, one of the several folds in Baildon deriving from this erstwhile farming community.

The features of The Fold show how it enshrines eco-theological principles; this church worships God as if God’s creation matters. It does not simply praise God on Sunday and destroy God’s creation on Monday. The Fold’s walls and floors are massively insulated. The windows are triple-glazed. 8 kW peak photovoltaic panels run along the south-facing roof. Three electric car charging points have been provided. The whole building is powered by electricity: there are a few little-used wall-mounted radiators; there are far infrared heaters in the ceilings which heat whatever contains moisture, particularly people, but not the air; there is an extensive air handling unit which is COVID-secure since no air is circulated: the air handling unit expels all used air, utilising its warmth to preheat the totally fresh air sucked into the building. Everyone who enters the building says how warmly welcoming it is although there has been little or no heating.

The Fold cost £1 million, raised over 10 years. Most of the money came from Methodist resources, both local and national:  the national Methodist Church is selling a number of inner-city sites where there is no longer a viable congregation. Some are very valuable. Other funding came from Trusts.  The local community is proud of a church that it calls ‘the hub’ of activity in Baildon, a suburb of 16,000. Two of the builders said they were so impressed by the community spirit that they would canoe along the Leeds-Liverpool canal which passes lower Baildon – they were sponsored for over £1,000. A local man who said he was going to leave £5,000 in his will to the church, although he was not a member of it, decided he would donate the money immediately.

Baildon Methodist Church faces the future. By spending a considerable amount of money now, it has brought down predicted monetary costs and, most important of all, reduced the burden of CO2 emissions on the next generations.

The church, a triple-certificated Eco-Congregation, was determined to show itself to be an exemplar of a fair and sustainable future. In Mark 16:15 Christ’s Great Commission states, “proclaim the good news to the whole creation” (New RSV); The Fold benefits far beyond the local community, and not simply humanity, by emitting no carbon dioxide. It is for ‘the whole creation.’  For too long churches have excluded biodiversity from their active imperatives. Surrounded by a garden including thirty  fruit trees, the eco-friendly Fold sits lightly on the earth; indeed it enriches it. Baildon Methodist Church is not just wringing its hands over global heating; it has acted.